A week in the Veneto

I love Italy. While I was away, idly adding up the various holidays I've taken there over the last twenty six years, I worked out that I must have spent the best part of two years there, North to South, from Sicily to the Alto Adige and at most points, at least briefly, in between,

But with the exception of one night passing through Verona and excluding Venice itself, I have never been to the Veneto. So that's where I took myself last week. Three nights in Verona, three in Padua and, as I shall reveal, a final day in Treviso in anticipation of an early morning flight home.

I've had a lot of complaints that you don't get enough pictures on my blog, so my plan was a "photo essay" on my return but there have proved to be two difficulties in that regard. Firstly, I'm not very good at taking photos, never mind the restrictions of doing so on my phone. Secondly, in the galleries and churches, the taking of photographs, something  that was previously "Vietato", (which despite the literal translation historically meant "mildly disapproved of") has now become "Severamente Vietato" meaning that you're really not meant to do it. So I'm afraid I'm left relying on some stock photos mixed in with my own.

With that foreword, here are my reflections on a great week. 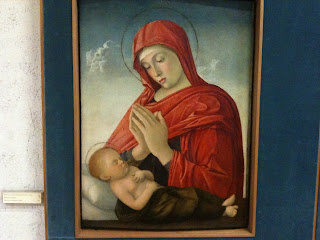 I didn't go to see Bellini's, although he is one of my most favourite artists. But in this part of the world you can't really avoid him, even if you had any desire to do so. This was my favourite. In the Museo Castelvecchio in Verona. Obviously an unusual colour for the Madonna's shawl and pedants might note that the hands are a bit big but nonetheless the Lady herself has that almost mystical quality that only Bellini brings. By the way, it's still not as good as the one we've got in the Burrell. 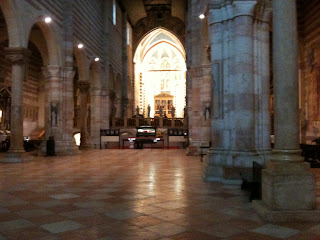 This was the Church I was most keen to see. Never mind me on my iPhone, I suspect Annie Leibowitz at the top of her game would struggle to do it justice with a camera. Proper Romanesque, arguably the most important second generation Romanesque church in Northern Italy. Too much for me to describe, I leave that to Wikipedia, but I would just like to commend the altarpiece  a copy of the Mantegna original; a copy because, as the accompanying information unashamedly declares, the original was "stolen" by Napoleon. 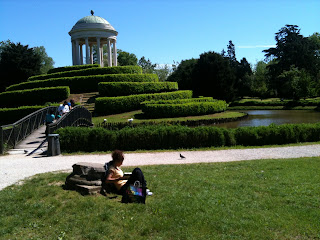 Some genius in the marketing of Italian Tourism came up with the idea of the "Museo Aperto". The idea of a place which does not just contain museums but which is the museum itself. Nowhere better encapsulates that idea than Vicenza. There is nothing particular to see and yet there is everything to see. It is a place of astonishing beauty. You don't need to do anything there, you just need to wander about. That's enough.

I wrote at Christmas that I was determined to see this and indeed it was the principal objective of my trip. It didn't remotely disappoint. It is breathtaking, not only in it's artistic achievement and significance but also in the wonder of its survival, almost intact, over more than 700 years. But, and there is a but, in the end it didn't quite bring the wonder of the same artist's work in Assisi. A price has been paid for that survival. You enter (literally) through an airlock, are restricted to a twenty minute visit and the whole thing is just a bit..... sterile.
In Assisi you see the equally great art in the context of a "working" church. That's surely what Giotto at least would have wanted. 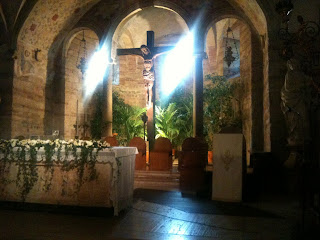 This is not the picture I really wanted here. On your "Verona Card" you got "free" entry to the four big local art churches. San Zeno was worth the entry fee alone but two of the others, San Anastasia and the Cathedral were cosi cosa. And the final church, San Fermo, I suspect, I wouldn't have looked out at all without the incentive of a "free" ticket.

I don't really do religion in the sense that I'm a confirmed agnostic but I'm not an atheist for equal reason. San Fermo is on the bank of the river and the whole building is damp. The artistic prize is the lower church, which is in the picture, but in the upper Church there was an "everyday" statue of St Anthony. Now the iconography of St Anthony involves the Christ Child sitting on his shoulder while the Saint, in his other hand, holds a lily, that being his "symbol". Big plaster life size statues of Saint Anthony are familiar to just about anybody who has ever set foot in a Franciscan church. And big plaster lilies.

But in this church it was not a plaster lily but a real lily that the Saint held in his left hand. And around his feet were many more, so that appeared as if he was standing amidst a field of lilies. And I passed on, anxious to see the lower church which was itself beautiful and, as I hope you can see, made use of the damp to cultivate ferns behind and around the altar. But, afterwards, it was the simplicity and yet beauty of the earlier image that stayed with me. And caused me not quite to give up on faith. 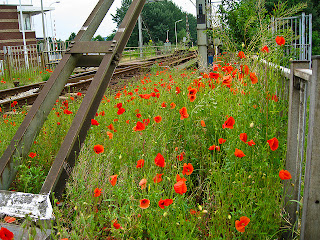 Which reminds me of something which happened earlier. When I arrived in Italy, at Friday lunchtime, it was raining. Not the really spectacular rain that I will come on to, more a sort of "Scottish" heavy drizzle. And it rained like that for the next thirty six hours. But when I woke up on the Sunday, the day I had earmarked for my trip to Vicenza, the sun had arrived and on the back of the previous  rain you could almost see "things" growing.

The main railway station in Verona, like many such in Italy, has any number of disused sidings. And among these sidings were poppies; individually and in clusters, growing through the stones and all along the rusty disused rails. You read the poets writing about something bringing joy to the heart and perhaps too easily dismiss that sentiment. This however undoubtedly brought joy to my heart. After an evil, apparently never ending, winter at home and even then not much immediate improvement on arrival south of the Alps, suddenly here was a harbinger of warmer times and happier days. Suffice to say that affected me. 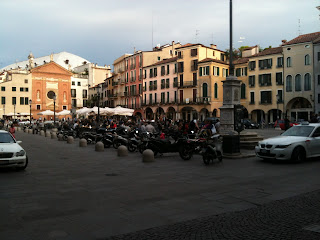 My objective in Padova was to see the Scrovegni Chapel, Anything else was to be a bonus. I was never more mistaken in my life, Wee Mo and I used to play a game about where our main home in Italy would be if we ever won the lottery really big. Not the Summer house in the Province of  Perugia or the apartment close to the Ghetto in Venice for the Carnival or even the beach house near Siracusa where we'd catch the last of the Summer sun each October. Rather, where we would actually "live". And our consensus was Parma. But I have now have cause to doubt that.

Padova is beyond praise.  Not one or even two great squares but (at least) five. Arcades that would credit to Bologna and shops that would hold court with Milan. No (particularly) great churches but, to compensate, the best public transport I have ever encountered anywhere in the world including a simply wonderful tram system. And food worthy of the Emilia Romagna, of which, in any justice, it should surely form part.

And, as an almost incidental bonus, I was accommodated in a hotel that had not been redecorated since at least the sixties and where the creaking lift, every time it arrived in the lobby, was half expected to disgorge Vittorio de Sica into  the suspicious eye of a young Sophia Loren.

Hopefully you will have gathered that I had a good time. 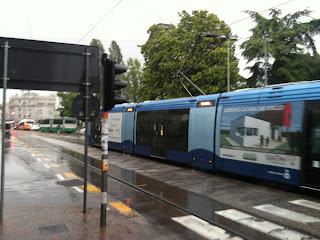 This is the kind of political bit. First of all, the trams, under a long standing administration of the Left in Padova, were simply brilliant. As were the buses, travel on both of which came "free" with your museum pass. And the trains, generally, were also brilliant although it is worth noting, in passing,  that the fast, entirely reliable "Frecciabianca" express trains were certainly no cheaper than similar provision here. In the end, you only get what you are prepared to pay for.

I was however taken aback by the issue of taxis in Verona where thanks to different local politics, public transport was largely non-existent after 8pm. My hotel in Verona, claimed to be twenty minutes by foot from the City Centre but that was clearly based on when Mo Farah stayed there. Taxis were however hard to come by and incredibly expensive when located thanks to a local system of regulation that restricted their number and then fixed their prices in accordance with the demands of the limited suppliers. (at one point I paid a 50% "night-time" supplement to be picked up at ten to eight in the morning!). This is of course one of the examples of the sclerotic Italian State that successive Governments there have failed to deal with, Perhaps they need a Margaret Thatcher figure of their own. (only joking). 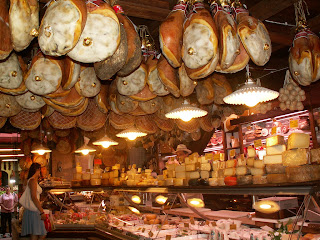 Needless to say, I ate astonishingly well. It is trite to say that you will never have a bad meal in Italy and from personal experience not entirely true. Nonetheless, I certainly didn't have a bad meal on this holiday. I'm not writing a travel guide so I'm not making any specific recommendations, not least because that would be unfair. For, on my last night, in Treviso, I wanted mainly to eat somewhere near the hotel as I had an early start the next day. As I was going to the Airport, I'd also booked a hotel outside the wall for ease of departure. So, as I'm walking home I find a wee place, busy enough but nonetheless a bit out the way and certainly no tourist haunt. And the food was brilliant. Capesante (small scallops) in oil and lemon; spaghetti with clams; pannacotta. All fresh ingredients, all delicious and, with wine, water and a an Averna (to aid the digestion you'll understand) 32 Euros in total. There are literally thousands of such establishments. It would be unfair to single any one out. 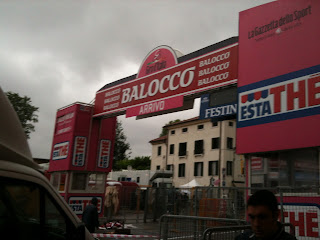 Everything about Italy is just a wee bit exaggerated. The colour and the light; the art; the food; the shops; the fashion; the religion (one church in Padova claims in all seriousness to accomodate the body of St Luke which was conveniently stumbled across in a street nearby at some point in the 11th Century. Just the body, mind you, for some Holy Roman Emperor subsequently removed the head to Prague!)

Above all however, "life" is a bit exaggerated, even when it comes to something as mundane as the weather. My last day was spent in the midst of a thunderstorm of biblical proportion. Think the worst Glasgow Fair Friday ever and then cube it. And the Giro D'Italia was to finish in this weather in Treviso, the very town I was accidentally in.

And I couldn't go, because even my "waterproof" clothing was soaked through, literally, to the skin.

As it turned out, things eventually dried up sufficiently for me to get into town and at least see the end of the show. After which, a bit like Sir Bradley that self same day, it was time for my temporary retirement.