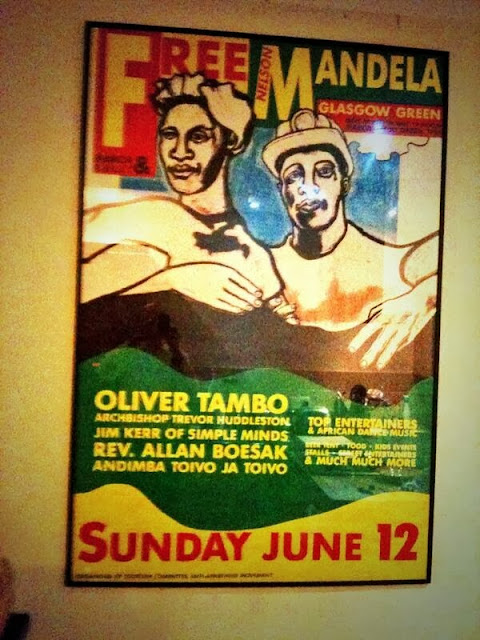 Mandela is dead. It is always the case that although you mourn in such circumstance nominally for the departed, in reality you also mourn for what you have lost of your own life.

When I was at the Law Society, I was at some sort of event involving our big, very money minded, firms when I was approached by one of their senior partners. Who, with respect to him, probably earns more in a year than I earn in ten.

"We've met before" he observed. "When I was arrested on an Anti-Apartheid protest."

And, indeed, in the early eighties, I had a vague recollection, at the request of the Scottish Committee of the Anti-Apartheid movement, of touring a series of students in custody at Stewart Street Police Station. To reassure them, as a seasoned defence lawyer aged then of all, perhaps not even, twenty five years, that the Crown would hopefully see sense over their arrest for sitting down in (Glasgow) University Avenue in protest of the University's continuing investments in South Africa.

Fortunately for the students, if not for the Legal Aid fees of my then employers, the Crown did indeed see sense and everybody was ultimately released without charge.

But that little (very little) anecdote demonstrates that we shouldn't underestimate the breadth of opposition to Apartheid in Scotland. For it embraced not only those I will come to but also those who would happily go on to embrace the most rapacious of rapacious capitalism.

Why did it? There was something peculiarly British, in the Churchillian sense of British, about the outrage at Apartheid here. For, unlike so many (sic) banana republics, Apartheid South Africa operated within a bastardised version of the rule of law. There were elections; an independent judiciary; even the illusion of a free press. It was just that not everybody could take part. And, for all people run down our own Country, an awful lot of people, by no mean all on the traditional left,  thought that this was simply "not British". Ironically perhaps. thought that particularly in relation to the behaviour of a  former colony.

And be in no doubt there was also a religious element. One of the two pillars of the Anti-Apartheid movement was the reformed church. Here in Scotland, the Church of Scotland. South of the border the progressive wing at least of the Anglican Church. And that also said a lot. There was a genuine belief (I use that word advisedly) that no Protestant country should be behaving like this.

But there were two other groups around which the venn diagram intersection on the Anti-Apartheid campaign coincided with my own Party. The first, and less controversially of the two, were the Liberals. We weren't used to working with them and indeed in the eighties when the Anti-Apartheid fight was at its height, there was no love lost between our two Parties over their association with the "traitorous" SDP. But they were at least as consistent on this issue as us. Indeed arguably more unanimously so, for Scottish Labour has always had a faction who saw little sense in devoting much time to events "overseas".

And the second, it should be acknowledged, was the Communist Party. At some point somebody needs to write a proper history of the Communist Party of Great Britain. It is easy to say now that they were wrong, sometimes very wrong, about the Soviet Union. But it should not be lost sight of that to so many progressive campaigns they brought discipline and focus. And, above all, organisation. And never more so than to the Anti-Apartheid movement.

Maybe they even did start off thinking that this was just an opportunity to secure recruits for a wider battle but on any view they became consumed by the justice of the specific cause. And in the end that commitment survived even the effective collapse of Communism itself. It is impossible to understand the campaign here, or indeed in South Africa itself, without respecting that role.

And so finally to me. There have been any number of people, some of whom at least had a pretty tenuous link to the fight, lining up to talk about meeting Mandela. I can beat that however, for I didn't.

For me, there were three greatest days for the Anti-Apartheid struggle in Scotland. The first was the giant demonstration on 12th June 1988 calling for Mandela's release. It was the year we got married and the day itself was aided both by the most glorious weather and the realisation as we rallied at Glasgow Green that The Republic of Ireland were beating England in the 1988 European Championships. The poster which illustrates the start of this article, acquired at the time for us by a very junior Glasgow Councillor called Frank McAveety, has hung in our kitchen ever since.

The second was 11th February 1990, the day of Mandela's release. People gathered spontaneously outside the Embassy in the famously renamed Nelson Mandela Place and spent most of their time just hugging each other while, to my memory at least, the sound system brought to the scene by wee Ian Carty (who wasn't actually particularly wee but was so named because he was the son of big John Carty, who wasn't particularly big) played Free Nelson Mandela and Nkosi sikelel iAfrica alternately all evening.

And the third was  9th October 1993 when Mandela finally came to the Glasgow to receive the Freedom of the City awarded to him twelve years before. The weather could not have been more different from June 1988 for it poured down all day. But we marched anyway. And caught a glimpse of the great man and heard the speech he made.

That night, the Council arranged a reception in the City Chambers and for my small small part in providing occasional legal advice I got an invite. Mandela was of course to be the guest of honour and never had so many cameras been gathered by the Scottish Left in one place.

But the great man didn't come. For having stood in the pouring rain all day to take our salute even his famously iron constitution had proved unequal to the Glasgow weather.

So I never did get to meet Nelson Mandela. But on any view my life has been a better one for having known him. May he Rest in Peace.